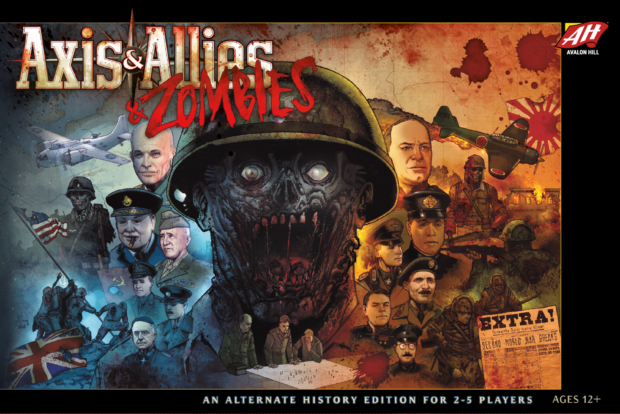 Last week Geek and Sundry published an exclusive view of the box art for the upcoming Axis & Allies Zombies game. The article on Geek & Sundry also included some details about the game from game designer, Scott Van Essen.

Notably, the zombie mechanic is meant to stop turtling. In the article Scott Van Essen is quoted with the following,

“What I’m most excited about is instead of fighting over the same territory again and again, what happens is those turtles become more and more overrun by zombies and suddenly it’s just too dangerous to fight or even to try just stay there.”

It also turns out that AAZ is not only it’s own game but also an expansion to Axis & Allies 1942 Second Edition. (The article mistakenly leaves out the “Second” part of “Second Edition”).

Although we think there are other more historical, real-world methods of preventing turtling (for instance weather or other events), the line of thinking here is good and hopefully this is just the beginning of more expansions on the Axis & Allies franchise.

Finally, if you’re headed to Origins Game Fair this year, then you’re in for a treat. Wizards of the Coast has listed two events at 2pm on June  14 for Axis & Allies & Zombies. You can be one of the first to try out this game before it is released.