Written by Bunnies P. Wrath on December 18, 2010 at Axis and Allies.org, edited by Rorschach at I Will Never Grow Up Gaming

This article was written for intermediate to advanced players of the Spring 1942 edition of Axis and Allies.

For ease of reading, detailed math is not included in this article. Throughout this article, when describing a combat, I always list the attacking force first, e.g. “4 infantry vs. 2 tanks” means 4 infantry are attacking 2 tanks. 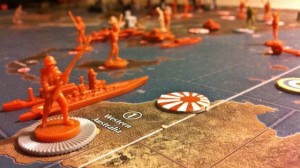 Section 1: Cost Efficiency on the Attack.

Infantry is the most cost effective defensive ground unit for two reasons. It is cheap; each casualty costs only 3 IPCs. It also gives the most defensive hitting power per IPC spent.

In combat, the most cost effective fodder attack unit is the infantry. Again, each casualty costs only 3 IPCs.

The defensive value of infantry is readily understood. That given, the question for the defender is, can a player employ infantry so their opponent must deal with the infantry at the infantry’s strongest point, and if so, how? More on this later.

The offensive value of infantry is often overlooked even by players with a fair to moderate understanding of the game. I will give three examples, each with 30 IPCs of attacking units going against 6 defending infantry.

The clear winner in cost efficiency in these scenarios is not the one relying only on cheap infantry, or the one relying on more expensive but hard hitting tanks. The winner is the one mixing cheap infantry with tanks. With the offensive value of infantry understood (i.e. its inclusion making an attacker’s attack more cost efficient), the question for the attacker is, can a player employ infantry so their opponent must deal with the infantry, and if so, how? More on this later.

Section 2: Why Attacks Fail In Spite Of The Odds

Now let us say that you roll three dice. Say again that you want to see 1, 2, 3, or 4 come up on each die. It’s true that any *particular* die will probably come up 1,2,3, or 4. But the odds are low that *all* of them will end up with a good result for you. In fact, about seven out of ten times at LEAST one of those die is not going to come up the way you want it[/b].

When planning battles in Axis and Allies, remember that although you may engage in multiple combats, each of which is individually likely to end in your favor, the actual outcome will likely see you failing at one or more of those combats.

Suppose you have twenty tanks attacking twenty tanks. There’s a good chance both sides get wiped out.

But suppose that you have twenty tanks attacking just ten tanks, with the surviving attackers fighting another ten tanks in a following battle. Now, the attacker will survive the first battle with about fifteen tanks, and the second battle with about nine tanks.

Although attacker and defenders do best in combat when their forces are concentrated, success in Axis and Allies requires attackers and defenders to spread out a bit, to control or contest territory that’s needed for income.