It’s been a while since we have reported any Axis & Allies news but over the next few days we’ll be reporting more news both new and old as well as good and bad. First, let’s start with some exciting news. On Tuesday, July 29 on the Harris Game Design website Larry Harris himself informally announced the next two Axis & Allies board games. The games will be Axis & Allies Europe 1940 and Axis & Allies Pacific 1940. Sources (read as speculation for now) say that these games are due to be released next year for the 65th anniversary of the ending of the war. This poses the question, willthe Europe game will be released on VE day and the Pacific game be released on VJ day?

We even have some details about the game. The questions/requests below were asked by Imperious Leader (IL) and answered by Larry Harris (LH). 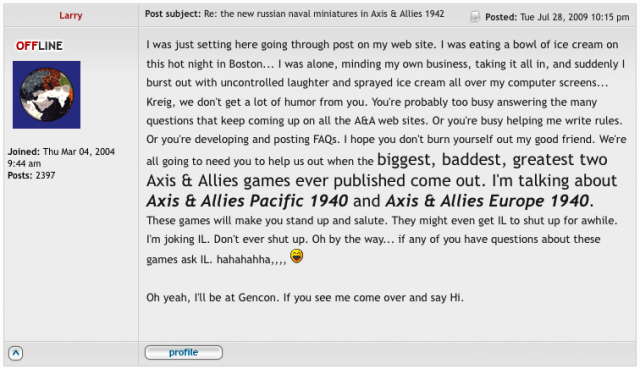 IL: I hope you have historical victory conditions this time and that these games can be linked into one huge game ( with optional mid section of map)
LH: They can

IL: I hope the map is large enough so people don’t have to draw their own.
LH: It is

IL: I hope you include a score sheet on the back of the rules so players can copy it and write down officially the IPC
LH: Score sheet?

IL: I hope the dice have symbols on them
LH: They don’t

IL: I hope you change out some of the artillery sculpts
LH: Not happening

IL: I hope that japan gets a new battleship
LH: It won’t

IL: I hope you have mechanized infantry and these are no longer considered “technology”
LH: Done

IL: I hope the A-bomb can be developed in the game
LH: I don’t think so

IL: I hope that neutrals have military forces and be swayed to align with one side or the other
LH: They do

IL: I hope that Japan and Russia can not be forced into war for either of them to win
LH: “forced”?

IL: I hope that you include a deck of cards?
LH: No cards

Check out the forums for more discussions