The following is a picture of the map stitched together from several photos. Click on the image below for a 3 MB version. 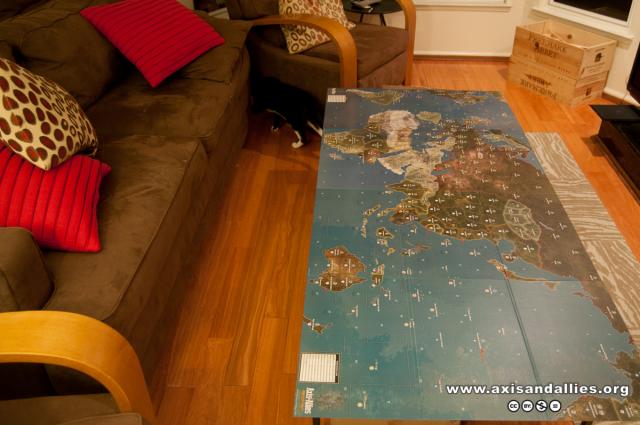 The global rules are mostly based on the rules from Axis & Allies Europe with a few extra changes just for the global game plus the unique aspectsof Pacific 1940. When following the rules, do it in this order:

Allies: must control Germany, Southern Italy, and Japan for round of play and also control at least one Allied capital.

Axis: must control 14 victory cities for a complete round of play and also control at least one Axis capital.

Line up your maps from each game, they will fit and it looks great.

Setup the units as listed on all of the setup charts found in both Europe 1940 and Pacific 1940. The following units are added to the setup:

The following is a list of what territories and sea zones are adjacent between the east and west edges of the map.

Germany. At war with France, UK, and ANZAC. May declare war on USA, the Soviet Union, or China per the standard rules. Declaring war on one nation does not affect the status with the two.

Soviet Union. Not at war. May not declare war on an Axis power in Europe until turn four unless an Axis power declares war first. May declare war on Japan (the rule book indicates the game setting is before the non-agression pact, which was signed in 1941). When not at war with Japan, may not move units into China.

Japan. At war with China. Movement of Allied forces into China is an act of war against Japan. May declare war on UK, ANZAC, USA, France, or the Soviet Union per the normal rules. Declaration of war against either the UK or ANZAC immediately results in a state of war with both. Being at war with France, the Soviet Union, or USA are all mutually exclusive meaning being at war with one of these does not affect relations with the other two. Japan may only attack Dutch territories if at war with UK and ANZAC.

France. At war with Germany and Italy. May declare war on Japan on any turn per the regular rules.

San Francisco is not a capital.

This will be covered in a future preview.